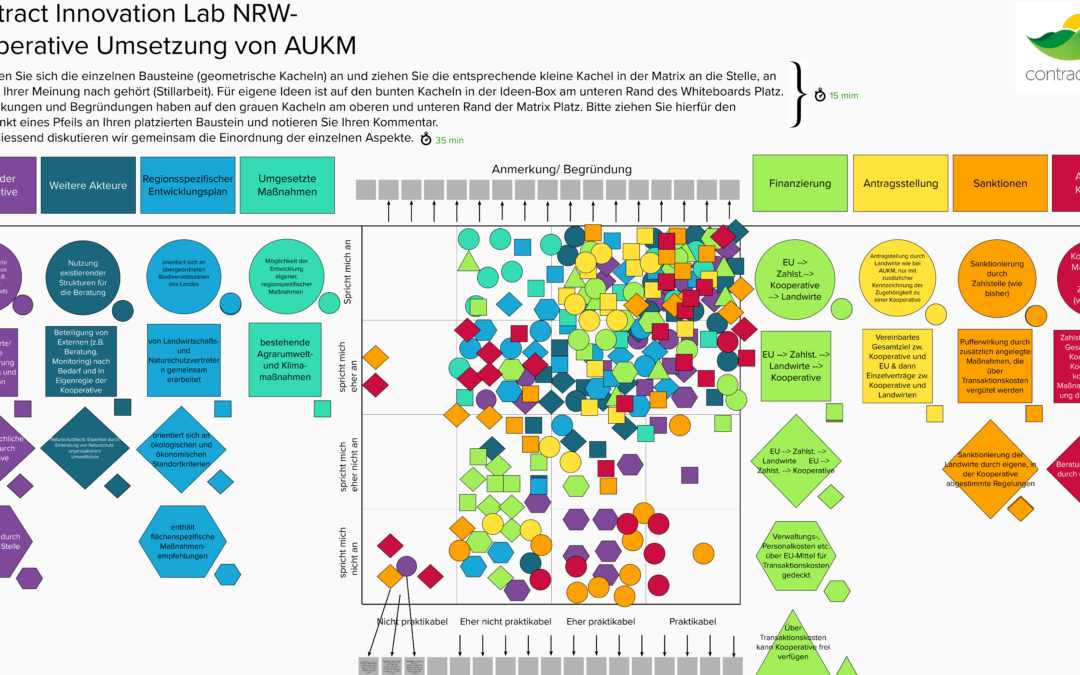 Collective Approachrefers to a collection of approaches that involve more than two individuals or parties who are progressing towards a common goal by undertaking collective action. Collective approaches may make use of collective contracts and coll... More in Focus

The Innovation Lab NRW (IL NRW) gathers various stakeholders in regular meetings to discuss the way forward towards a more attractive and more effective funding scheme for voluntary agri-environmental engagement. In this regard the collective approachrefers to a collection of approaches that involve more than two individuals or parties who are progressing towards a common goal by undertaking collective action. Collective approaches may make use of collective contracts and coll... More, especially for biodiversity-related measures, seems to be a promising option. It has the potential to increase the effectivity of interventions, while reducing barriers which deter farmers from participating in agri-environmental schemes. In agreement with the participants of the Innovation Lab NRW this innovative contractual solution is in focus regarding the development of a suitable concept, which could serve as a blueprint also for other areas in Germany.

There have been five CIL-workshop and three PIL-workshops conducted to this date. After switching to a digital format due to the Covid-19 situation the attendance of farmers at the CIL-workshops dropped considerably, while the participation of administrative and advisory representatives in the PIL workshops seem to have even grown. To make sure farmers´ perspectives are included in the further development of a concept that should be especially attractive to practitioners, a survey was conducted asking specifically farmers of the region for their opinion on a favourable future agri-environmental funding programme. Altogether 74 farmers from North Rhine-Westphalia (NRW) completed the survey, making also good use of the open comment section available for each multiple-choice question, contributing to a rich pool of “in between the lines” ideas and opinions.

Fig. 1: Most important aspects for an increased uptake of AECMs (own survey, completed by 74 farmers of NRW-region)

When asking about the most important aspects that influence the decision to join a scheme, the argument of a less bureaucratic handling of agri-environmental contracting tops the notion of a sufficient financial compensationIn the sense of the polluter pays principle: Compensation of the loss of performance and functionality of the ecosystem through appropriate measures. In the sense of incentive creation: A remuneration (typically based on the conce... More, making this the most important barrier (see figure 1).

Another important aspect is the need for greater flexibility when implementing measures. Rather than adhering to strict deadlines, there should be some room for pragmatic decision-making especially for some weather-dependent treatments (e.g. sowing or mowing) when meteorological circumstances indicate adverse outcomes. Sometimes also small spatial discrepancies (regarding not only to little but also too much area used for the measure) can lead to rather drastic sanctions. Some farmers noted that especially this strict handling of even minor discrepancies (mostly caused unintentionally) prevents them from joining a scheme. They simply do not want to invite hassle.

Experience from Pilot Projects as a Base for Discussion

Within Germany there are already a few regional pilot projects operating, implementing the collective approachrefers to a collection of approaches that involve more than two individuals or parties who are progressing towards a common goal by undertaking collective action. Collective approaches may make use of collective contracts and coll... More to a varying extent. The last CIl NRW-Workshop mid-September 2021 featured the presentation of a collective action project in Rhineland-Palatine and another one in Saxony-Anhalt. This way the CIL NRW participants were allowed a glimpse into the practical implementation of this approach along with its merits and challenges. Altogether 22 participants joined this 5th (digital) CIL-workshop representing farmers, (regional) agricultural and environmental administration as well as nature conservation organisations. In the discussion part of the workshop, aided by the whiteboard app Mural (see title picture), participants tried to identify the must-have components of an “ideal” collective contractSee collective contractual models..

Components of the Ideal Contract

There was agreement, that the necessary controls/checks should be reduced to a minimum, since they constitute a considerable hassle for the farmers which costs them time and nerves. The way a pilot project (Saxony-Anhalt) organizes the checks within their collective (checks are carried out, during a time when potential mistakes or failures can still be corrected) is seen as a favourable option by many farmers. To exploit the full potential in terms of farmer support that a collective approachrefers to a collection of approaches that involve more than two individuals or parties who are progressing towards a common goal by undertaking collective action. Collective approaches may make use of collective contracts and coll... More, in theory, has to offer, practitioners feel that a close contact to an assigned field officer/advisor, who “speaks the language of the farmers” would be very helpful.

Another important topic was also the possibility to develop a feasible and fair sanctioning mechanism within a collective. The potential participation in making up the collective´s own general rules or statues has been welcomed by the farmers. The buffer effect, which a collective could potentially introduce to lower the risk of excessive sanctions for the individual farmer, is also a very well perceived advantage of being part of a collective.

How Important is Trust for the Motivation?

Picking up on the argument (“when joining a collective, one is depending on other farmers doing their part”) often used by opponents of a collective, the results of the survey allow for a more optimistic perception of the group effort. Regarding a possible influence of the collective approachrefers to a collection of approaches that involve more than two individuals or parties who are progressing towards a common goal by undertaking collective action. Collective approaches may make use of collective contracts and coll... More on the reliability of the correct implementation of measures, half of the participants say that they feel that their feeling of reliability would rather increase (see Figure 2).

This seems to indicate a general trust towards fellow farmers or at the very least a trust in the mechanisms of social control. This corresponds to results of a study asking Dutch farmers similar questions (see related blogpost). In Contracts2.0, there has been also a scientific study conducted that approached this topic using an experimental setup (“Public Good Games”). The results show that here the willingness to cooperate and the trust among farmers was even greater than experts had predicted (see blogpost). 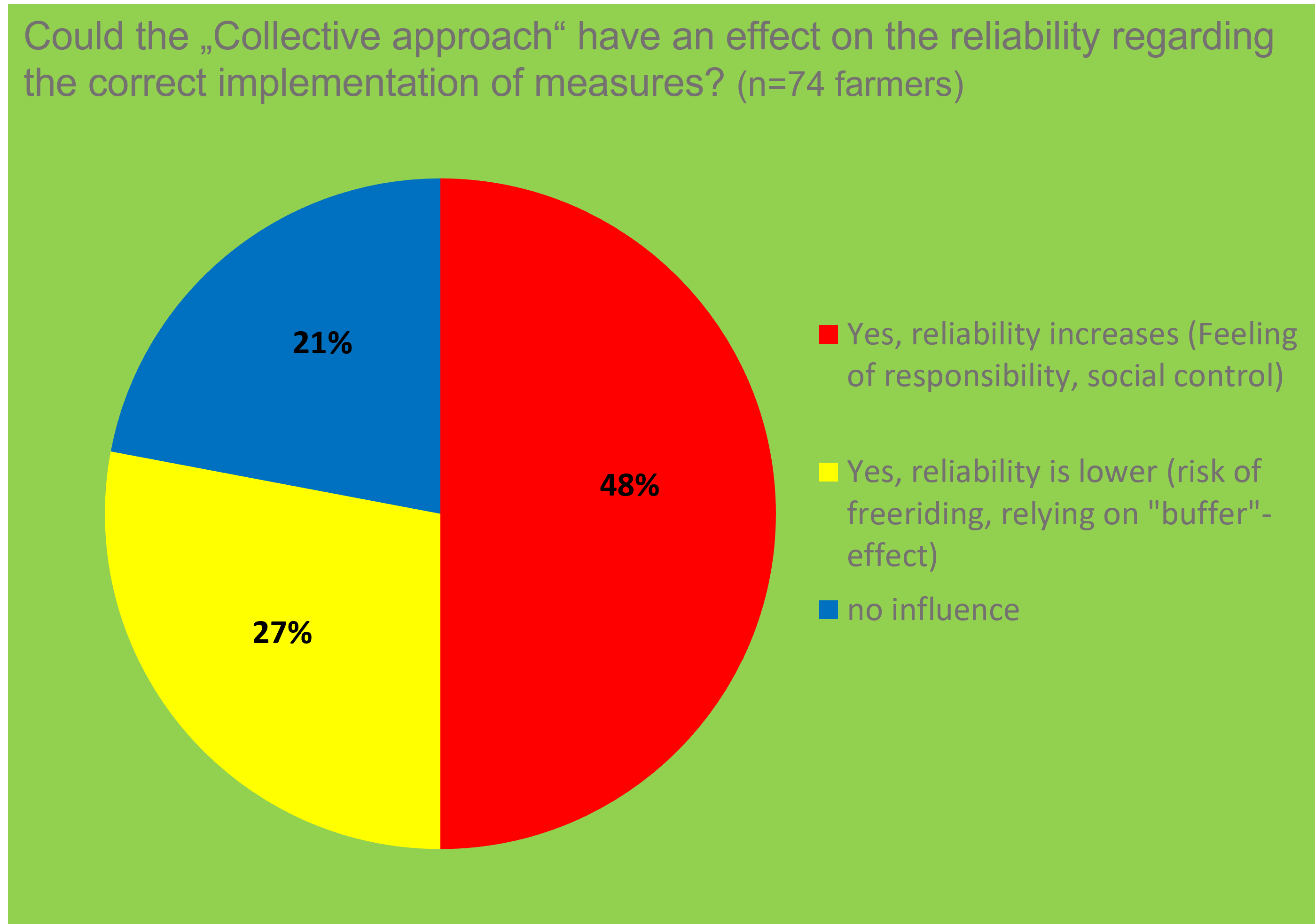 Fig. 2: Influence of  the collective characteristic on reliability. (own survey, completed by 74 farmers of NRW-Region)

How can Policy Help to Create a Conducive Environment for Collective Action?

The PIL NRW-workshop in November 2021 discussed administrative issues, which are relating to the main barriers regarding a potential implementation of agricultural collectives in Germany. Setting the broader goals and developing a shared vision regarding a certain region and its stakeholders can be challenging when diverse interests have to be taking in account. Ecological necessities need to be aligned with agronomic and economic aspects in order to legitimize the work of the collectives in the eyes of all actors involved. Another important guard rail for this process is the imperative to administer the measures without excessive bureaucracy.

Concerning the documentation and control processes practitioners as well as administrators stressed the need to simplify processes, in order to make participation in agri-environmental programmes more attractive. But contrary to the intention, the New Delivery Model of the Post 2023 CAP will not necessarily offer the longed-for simplification. As one PIL member puts it: “The wish for flexibility is the enemy of simplification”. Under these circumstances the role of the collective in supporting the individual farmer and alleviating the bureaucratic burden, becomes all the more important.

When thinking about efficient control mechanisms, another thought comes to mind: increasing confidence in a collective’s ability to self-manage and self-regulate would not only help reducing the costs (of multiple reviews of the same aspects), but also increase the bonding social capital of the group (social cohesion; social control; farmers’ trust in the collective to represent their interests) (see blogpost on the topic). To exploit the full potential of a collective implementation in terms of its environmental advantages, but also its socio-economic dynamics, a transfer of more responsibility to the collective could be helpful.

In order to ensure that the goals agreed between the collective and the administration are achieved and that the collective approachrefers to a collection of approaches that involve more than two individuals or parties who are progressing towards a common goal by undertaking collective action. Collective approaches may make use of collective contracts and coll... More is thus legitimized and supported by all stakeholders involved, efficient monitoring mechanisms need to be installed. There is still some work to be done here. In order to minimize the on-site inspections of the administration, which are costly for all sides, the use of new technologies (GIS, remote sensing, sentinal data, etc.) should be greatly expanded. These data could be fed into a (further developed) IT-supported and user-friendly documentation and communication system with a uniform frame of reference, which should also be the basis for reporting to the respective higher administrative level (with an increasing degree of abstraction). In this way, the flexibility, but also the efficiency and accuracy of the documentation can be increased and time-consuming micromanagement can be avoided.

A question, which needs to be openly discussed, when thinking about rolling out/scaling up the collective approachrefers to a collection of approaches that involve more than two individuals or parties who are progressing towards a common goal by undertaking collective action. Collective approaches may make use of collective contracts and coll... More: what is the advised impelemention depths to enable the full potential of the collective idea. The “exclusiveness” of the Dutch model (to take part in AECM programs at all, farmers need to join a collective) induces some hesitation within German adminstratitive structures as well as with some farmers. Building/maintaining parallel structures, on the other hand, also holds some  disadvantages. This issues needs to be recognized and adressed, before real progress can be made.

The survey addressing farmers of NRW showed a peculiar result regarding the question of how likely it is, that they would join a collective (see figure 3).

Fig. 3: Willingness to join a collective (own survey, completed by 74 farmers of NRW-Region)

The relatively evenly distributed responses indicate a strong heterogeneity in attitudes regarding this novel contracting solution. In addition to pronounced agreement, some farmers appear to have some reservations about this approach. Taking a closer look at the comments on this question in the survey, it appears that these reservations are mainly rooted in concerns about additional bureaucratic (and the corresponding financial) burden.

It would therefore be important to provide farmers as well as administrations with objective information on the subject as well as findings from research & practice and to support the initiation of further pilot projects. Even if this promising approach is not applied across the board in Germany in the foreseeable future, there are some regions which, due to the lack of existing structures, could benefit from an increased effectiveness of agri-environmental funding by applying the cooperative approach. For the farmers, for nature.

Results of the survey (Englisch)